The Joy of Sets

How do you like your stories? Settling down to engage with a novel, maybe.  Your regular fix of Eastenders?  Or--I know you're reading this, Alis and Frances--a daily hit of The Archers on the radio?  Perhaps you relish the structural perfection of a 90-minute movie.

In recent years there are more ways than ever to tell stories.  You can read them written as apps for your iPhone, or take in Shakespeare on Twitter.  But few, if any developments can have been as welcome as the box-set.  A series which might have evolved over months or even years on TV can be in your living room, one episode the push of a button away from the last.  Some stories only reveal their full glory when watched this way - stripped of commercials, characters growing and developing before your eyes.  Rome, 22 50-minute episodes, needs time to unfold, and it's hard to imagine a conventional movie delivering anything like the same punch.  The Wire shows a depth of ambition and accomplishment that's revealed only across the arc of the five series.  (Not all box sets are as felicitous: 24 watched back-to-back is  exposed as meretricious buffoonery). 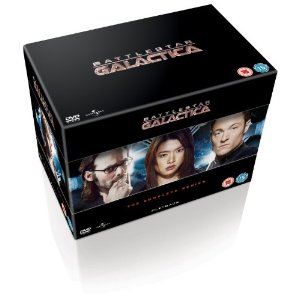 Now I've found my way to Battlestar Galactica, perhaps the first grown-up space opera.  (In the halcyon days of Star Trek, it probably never occurred to anyone that space opera might want to be).  I haven't finished all the seasons yet, so I'll reserve final judgement--but this is shaping up as hugely impressive drama.  And from such tawdry inspiration--an unutterably feeble late-70s Star Wars rip-off.  The four TV series, on the other hand, really do with hindsight seem  amazingly ambitious.  Airing from 2003-2008, an old-fashioned story of the last remnants of humanity fleeing killer robots manages to address issues of authoritarianism for the perceived greater good, racism, xenophobia, suicide bombing and torture in a way almost wholly absent from mainstream US drama.  If you wanted a nuanced exploration of America in the Iraq years, you had to watch a science-fiction show--at least until Generation Kill came along, and even that lacked Battlestar Galactica's thematic range.  Even the cliches are given a bit of life: the standard insubordinate pilot, Starbuck, is a woman (the mesmeric Katee Sackhoff).  Grizzled Admiral Adama, played with grim weariness by Edward James Olmos, has flaws so significant we frequently lose sympathy with him.  His counterpart, the reluctant President Roslin (Mary McDonnell and her shampoo-ad hair) is half noble war-leader, half tyrant.  And those killer robots? They end up commandeering our sympathies.

The episodes are fleeting by so quickly I doubt I can make them last until Game of Thrones launches.  I may have to find another classic series. I hear The Sopranos is pretty good...
at 5:30 pm

Also, I would argue that much of Star Trek: Deep Space Nine is grown-up space opera. It stumbles here and there, but especially in the last four seasons or so, I think hit a pretty high point.

Still, I'll concede a more consistent depth to the layers of BSG.

I find Alias to be another that really shines in boxed set. The final season suffered a little bit from accommodations to Jennifer Garner's pregnancy, but the story arc I feel remained strong throughout.

Tim, thats not fair. I only listen to the Archers about once a week, because nothing really happens (which begs the question, why bother at all, and the answer is that I'm not at all sure).

But - my favourite boxed sets are Bodies and Cardiac Arrest. Both medical, both very non-PC, and (according to my doctor son) frighteningly true to life. Oh - and they're very funny, too.

I drifted away from DS9 after a couple of series. Maybe I gave up too soon. I should also have included Firefly on my list.

I haven't heard of Alias. I'll have to track it down.

Frances, I think I'm too squeamish to get on with medical dramas. More Nevets' kind of thing, perhaps...

I thought about reminding you of Firefly, but I decided that it was assumed.

Alias is probably at least worth a go.

DS9 was okay for the first few, er, series, but it picked up (a) when Worf came aboard in Series 4, and then really picked up in Series 5 when the Dominion war ramped up.

The arc become more constant and the political and cultural-religious intrigue a lot more intricate.

But, as I said, it's not quite as strong in that regard as BSG, largely because the producers who were trying to push the show in that direction were doing so against the wishes of their executive producer and studio heads. As it was they, went far enough, that the top dogs through a temper tantrum at the end of the series and destroyed all the sets and blueprints and everything lest anyone be tempted to revisit DS9.

The books have really taken that line and run with it, thankfully.

And, yeah, I'm jotting down the titles on those medical shows...

Tim, the Sopranos, together with Deadwood and Rome are among the best from HBO. You should also check out The Shield, Hustle, The Tudors, Prison Break, Firefly, Veronica Mars, Boston Legal and Terminator the Sarah Connor Chronicles - all great shows which I enjoyed a lot.

By the way, I just finished my copy of 'The last free city' about a week ago. It was an awesome, gripping, elegant and intelligent novel. I liked it as much, and in somme ways even more than 'The Dog'. My favorite character was Ribauldequin. Thanks for this great read.

Speaking of which, is there a pub date for The Last Free City? :)

Mitch, those are some pretty good recommendations. Rome, Prison Break, The Tudors and Firefly I've watched and loved, which validates your taste. Deadwood has long been on my list to explore (and if someone had looked at my Amazon wishlist before Christmas, I might already have it...).

Glad you liked The Last Free City too. You're not by any chance the commissioning editor of a major publishing house?

Nevets, I'll DM you on Twitter as to how you can secure what is essentially an advance review copy...

You're not by any chance the commissioning editor of a major publishing house?

Sorry, but no. Too bad, that major publishers are usually looking for mainstream fantasy, represented by authors like Terry Brooks or David Eddings & Co., and not the sophisticated literary fantasy of your caliber, Tim.

I couldn't get into the Sopranos. Can't imagine why at all . .

I'm not ashamed to admit I watch series once they hit DVD. Yep, I like the straight shot - like reading a series of novels.

Mitch, I've nothing against fantasy of the Brooks/Eddings stripe. What irks me is that fantasy should be an imaginative medium, and we *only* seem to get writers working in thay tradition. Most fantasy publishers seem to believe that all readers want is The Lord of the Rings ad nauseam. That doesn't serve writers or readers well.

Donna, I'm now increasingly impatient with watching a weekly series format - although I may make an exception for Game of Thrones!