Although I haven't made the progress I would have liked on any of my projects over the summer, I have enjoyed several books and TV experiences which I can recommend to my readership.

First among these was Dorothy Dunnett's Niccolo Rising, the first in a series of eight novels of Renaissance intrigue.  Why did no-one tell me about these before?  The series kicks off with Claes as a humble dyer's apprentice in Bruges, but through determination, cunning and good fortune he rapidly shakes off his humble origins.  The machinations are at once complex and understated; Dunnett's calm prose and unshowy research top off a historical novel from the upper echelons of the genre.  My only dissatisfaction was the occasionally implausible character of the eponymous Claes/Niccolo, to whose magnificent cunning was added a scarcely credible degree of sexual magnetism.  At one point he seduces a bourgeois virgin, largely out of pity, and later reproaches himself for giving her such a magnificent sexual initiation that she can only be disappointed with her future husband.  Nonetheless, I anticipate much future enjoyment from Dunnett's novels. 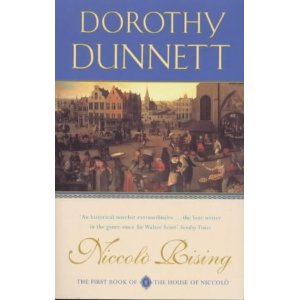 High praise also for the latest instalment of L.C. Tyler's latest Ethelred and Elsie novel, Herring on the Nile.  Fans will be pleased to hear that the transfer to an exotic locale (the clue's in the title) will be reassured to learn that the trademark wry humour and clever parody are never far away.

On a less exalted level, the Channel 4 TV take on the Arthurian myth, Camelot, never failed to entertain, despite some questionable casting choices, including a lightweight Jamie Campbell Bower as the legendary monarch.  On the plus side, Joseph Fiennes found the interpretation of an utterly bonkers Merlin well within his range, and Eva Green relished the opportunity to raise overacting to an art-form as Morgan Le Fay.  Sadly the series was not recommissioned and, while it was no Game of Thrones, I'll miss it.

Next on my guilty pleasures list will be The Borgias, which appears to have all the ingredients we came to know and love in The Tudors.
at 11:32 pm 2 comments: