His Last Duchess, by Gabrielle Kimm 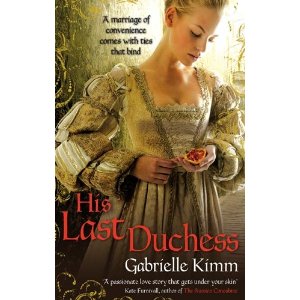 For tales of passion, cruelty and intrigue, saturated in vibrant colour with malice concealed under a formal politeness, it's hard to find a better setting than Renaissance Italy.  So much has been apparent since Shakespeare's day, and I am not the only fantasy writer to have drawn inspiration from the Italy of Machiavelli.  Gabrielle Kimm's debut novel, the historical romance His Last Duchess, is fired by a similar fascination.  Inspired by an enigmatic Robert Browning poem of the same name, Kimm explores the tainted marriage of Alfonso, Duke of Ferrarra, and Lucrezia de Medici.  Lucrezia is the teenage protagonist, married off for political advantage into the noble house of d'Este to the handsome and superficially charming Alfonso.  Alfonso, however, turns out to be some way short of the ideal husband; when the marriage starts to go awry (on its first night), his plans soon turn to rape and murder his new wife.  He is not a man to court compromise or reconciliation.  Lucrezia understandably objects to Alfonso's various abuses, and when a poor but talented painter arrives at the court, it is clear where her affections will tend.

The plot is neatly executed, even if the elements are familiar, with Kimm's skill lifting the novel well above the ruck.  Lucrezia is a lively and engaging presence, Alfonso a meticulously observed and frightening psychotic.  The prose is beautiful, reflecting the sensuous Tuscan warmth of the setting; the details are rich and vivid without ever overwhelming the movement of the story.

Lovers of Shakespeare will recognise many of the motifs of Renaissance Italy: forbidden and impossible loves, apothecaries, poisons real and imagined, friars and recondite inheritance disputes.  The Renaissance drama His Last Duchess most resembles, though, is Webster's The Duchess of Malfi, with its claustrophobic intensity, warped lusts and a villain pushing the boundaries of sanity.

His Last Duchess is an accomplished and absorbing historical novel.  I look forward to more from Gabrielle Kimm.
at 7:00 am

It's certainly a heady concoction...