My research into the Fourth Crusade has been going very well (and so it should be - I've been reading nothing else since mid-September).  Knowing a lot of facts about the Crusade doesn't get you very far as a writer, though.  It's like buying a pet sheep and expecting to get a jumper out of it.  You have the raw material but you need a lot of skill and labour to turn it into the end-product.

After the critical "when and where?" question has been addressed, the writer of historical fiction has at least two other critical decisions to make.  These are the proportion of genuine historical characters in your story (the peerless HBO series Rome adroitly mixed the giants of the late Roman republic with fictional characters), and the balance between character and action (which we can also think of as the extent to which the drama is internal or external).  I've plotted a few historical novelists on the graph below to suggest where their work falls against both of those criteria: 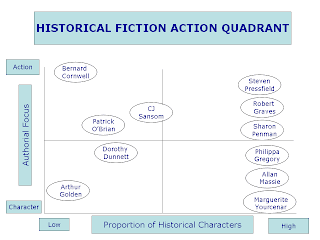 A writer at the top left, like Bernard Cornwell, writes mainly action-centred stories built around fictional characters.  Depth of characterisation will be sacrificed for pace and excitement, and appearances from characters from history will be rare.  At the other extreme, Marguerite Yourcenar's Memoirs of Hadrian is a largely interior drama imaginatively recreating the psyche of a genuine historical character.  Closer to the middle we have writers like Dorothy Dunnett or CJ Sansom, who in their different ways interweave historical and fictional characters while balancing character and action.

There isn't one right way to do this, and the reader's enjoyment will be conditioned by the author's execution and personal taste.  I myself found Memoirs of Hadrian one of the most boring novels I've ever read, but I love the work of Allan Massie, which sits very close to it on my quadrant.

These are choices I still need to make for Sons of the Devil.  My thinking at the moment is somewhere round about Robert Graves or Sharon Penman on the graph.  Once that's sorted, I'll need to consider some more plot-specific questions: the identity of my protagonist(s), starting point of the story, narrative tone.  But for now, those things can wait.  Instead, I must continue my journey through Charles M. Brand's compelling Byzantium Confronts the West, which explains in convincing detail just why Constantinople was ready to fall to a group of quarelling opportunists in 1204...
at 7:00 am No comments:

What's In A Name?

Ye are of your father the devil, and the lusts of your father ye will do. He was a murderer from the beginning, and abode not in the truth, because there is no truth in him. When he speaketh a lie, he speaketh of his own: for he is a liar, and the father of it.

Last time we looked at some of the material available on the Fourth Crusade (there is plenty more - this is a subject historians made whole careers from).  Today I'm starting to explore how that might express itself in fiction.

The Crusades, however their original intentions became perverted, sprung from a religious impulse.  Any attempt to write about them in our largely secular age is doomed to failure unless it recognises that people had a fundamentally different world-view at the time of the Crusades; sober and reliable chroniclers can mix accurate eyewitness accounts with tales of miracles and spiritual apparitions.

With this in mind, I thought a title drawn, directly or indirectly, from the Bible would be a good place to start.  I ended up with the passage quoted at the head of the piece (taken from the never-bettered King James version - the progressive enfeeblement of subsequent contemporary versions can only be deplored).  The quotation above readily fits the Fourth Crusade, whose participants may have felt they were inspired by God, but whose achievements were rather less elevated.  The working title for the first instalment paraphrases the verse to become: Sons of the Devil.

Future volumes--if this is not looking too far ahead--have titles that similarly take their inspiration from the same source.  The second volume, covering the sack of Constantinople, is The Land Desolate.  Again the King James version gives us the crispest prose.

Behold, the day of the LORD cometh, cruel both with wrath and fierce anger, to lay the land desolate: and he shall destroy the sinners thereof out of it.

The final volume treats the early days of the Latin Empire of Constantinople, and resolves the stories of those characters who survived the first two volumes.  In this case I set aside my fidelity to the King James version; the New American Standard version has greater force.

For the fate of the sons of men and the fate of beasts is the same. As one dies so dies the other; indeed, they all have the same breath and there is no advantage for man over beast, for all is vanity.

This gives us the title for the last part of the story as The Fate of Beasts.

All that remains now is the little matter of finishing research and writing the book(s).  Next time, we'll look at some of the narrative choices I'll have to make before I can start.
at 7:07 am 2 comments:

Email ThisBlogThis!Share to TwitterShare to FacebookShare to Pinterest
Labels: Fourth Crusade, Sons of the Devil, The Fate of Beasts, The Land Desolate

The Fourth Crusade - a Selective Bibliography

My recent research into the Fourth Crusade has been making good progress.  I have learned--and unlearned-- a lot more than I did a month ago, although inevitably there is always more...

The mutual incomprehension and different motives between the Pope, the Franks, the Venetians and the Byzantines led to a tragedy of accelerating inevitability.  There were no Christian winners of the Fourth Crusade: Constantinople, immeasurably the greatest city in the world, was all but gutted and its empire emasculated; few of the Crusade's leaders survived to return home.  Those Crusaders who pressed on to the Holy Lands achieved next to nothing, and Jerusalem remained in Muslim hands.  The Crusade mounted three successful assaults on cities: Constantinople twice, and Zara once; all were Christian.

Those who are interested in the topic may find my reading list helpful.  There is no shortage of well-written and researched material on the subject, although it has surprisingly rarely featured in fiction.

The Conquest of Constantinople, Robert of Clari

This account of the conquest, by a humble knight, neatly counterbalances Villehardouin's "official" version.  Not to be relied on facts, but his awe on arriving at Constantinople is palpable.
The Conquest of Constantinople, Geoffrey of Villehardouin

One of the Crusade leaders, Villehardouin is not always to be taken at face value.  His negotiations with the Venetians at the outset set in train many of the horrific consequences of the Crusade, and he understandably keen to push responsibility elsewhere.

Histories of the Crusade

This Osprey illustrated history, only 100 or so pages, is an excellent primer.  The battlefield diagrams, as one would expect from Osprey, are invaluable.

The Fourth Crusade - the Conquest of Constantinope, Donald Queller and Thomas Madden

Perhaps the definitive history of the Crusade.  Queller and Madden judiciously assess the sources, clearly outline the sequence of events and delineate the key players.  Indispensable for students of the period.

The Fourth Crusade and the Sack of Constantinople, Jonathan Phillips

Covers much the same ground as Queller and Madden, in equally engaging fashion.  In line with most modern scholarship, Phillips acquits the Venetians of the charge of wilfully aiming the Crusade at Constantinople.

Enrico Dandolo and the Rise of Venice, Thomas Madden

Working on his own this time, Madden gives a fascinating insight of Venetian society throughout the 12th century and shows how the Venetian doge Dandolo was shaped and constrained by his environment.  Impressive scholarship and a stimulating tale.

Angold approaches the Crusade thematically rather than chronologically, so this is not the place to start your crusade researches; but once you understand the events and the sources, this study offers some telling insights.

Histories of the Middle Ages

A high-level study of a lengthy period by its nature offers little detail, but this is a good overview for the beginner.  Bishop, an American career historian, bizarrely dismisses the Emperor Frederick 'Stupor Mundi' (perhaps the first 'Renaissance prince') as "not really a very nice man", which is perhaps not entirely to the point.

Daily Life in the Middle Ages, Paul B Newman

This one does exactly what it says on the tin.  Food, drink, underwear, armour, medicine: all human life is here.  Well worth a read for anyone interested in any aspect of the Middle Ages.

Although the Fourth Crusade is fascinating, the book titles display a dismal lack of variety.  The logic of calling your book "The Fourth Crusade" is undeniable, but in fiction we can allow ourselves a little more latitude.  Tune in next time to see my working title...