"Where Do You Get Your Ideas?"

This is notoriously the question that irritates writers the most.  I'm never sure why  (Personally I'd rather hear that than some clown on my doorstep asking "Can you spare £2 a month?" or "When did you last speak to God?").  I think perhaps it's because the question so fundamentally misunderstands the nature of the creative process.  A novel is a synthesis of influences and stimuli and there's very rarely a "ping" when the essence of the thing springs into existence.  For various reasons, I doubt that Melville was slumped in front of  the Discovery Channel eating pretzels one evening watching a documentary about whales and was thus inspired to write Moby Dick.

That said, sometimes there is an identifiable moment when a notion pregnant with possibilities leaps forth.  This is rarely in a very usable format but, with suitable polishing, the rough diamond may eventually turn into a jewel for all to admire.
Such a moment occurred for me a month or so ago.  At last year's Chichester Writing Festival, one of the panellists was Jonathan Phillips, Professor of the History of the Crusades at Royal Holloway University of London.  He was there to plug his latest book, Holy Warriors: A Modern History of the Crusades. 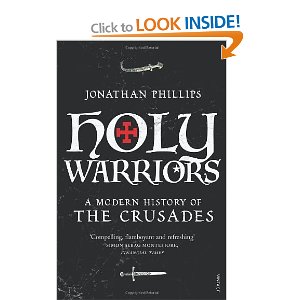 Professor Phillips was an engaging speaker and his book also seemed interesting, and made its way onto my Christmas list, from where it languished unread for many months.  The Crusades are of interest to all students of the Middle Ages, and in the past I've read Runciman's three-volume account more than once, and Norwich's popular histories of Byzantium and Venice have also treated the topic.  But it was not until I read Phillips' brief examination of the Fourth Crusade that I realised how magnificently it would lend itself to fiction.

The Fourth Crusade, preached by the choleric and dynamic Pope Innocent III, set out to recover Jerusalem from the Saracens, who had taken possession under Saladin some years previously.  Things did not go according to plan.  The predominantly French crusaders contracted with the Republic of Venice to transport them by sea to the Holy Lands; unfortunately they had somewhat overestimated the number of crusaders, and the wily Venetians (led by the scarcely credible blind nonagerian Enrico Dandolo) had negotiated a fixed price contract.  With no way to pay, they instead agreed to stop off and besiege Zara, a city coveted by the Venetians, but inconveniently a Christian one.  Having circumvented the further obstacle of excommunication by a furious Pope, they then found themselves inveigled into another side-project, this time the restoration of the claimant to the (once again Christian) Imperial throne of Byzantium.  This involved another siege and assault, this time of the impregnable walls of Constantinople.  The Crusaders' valour was unquestioned, but their political skills were more dubious, and they had failed adequately to assess the credentials of their candidate, the worthless Alexius Angelos.  And that  takes us merely to the end of the first volume of our tale...

Professor Phillips clearly shares my fascination for the Fourth Crusade, since I found he had written a volume devoted solely to that topic. 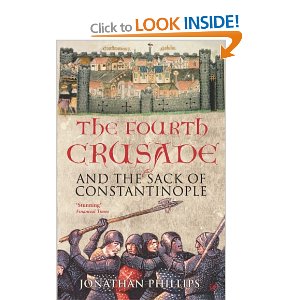 This book only cemented my enthusiasm.  The crusade contained all kinds of heroism,bizarre reversals of fortune, tragedy and triumph.  There are also some surprisingly readable primary sources, including Geoffrey of Villehardouin, essentially the crusade's chief of staff.  Even after eight centuries, his character shines through: brave, pious, but also dogmatic and humourless - and no match for the subtle Venetians.

The Fourth Crusade readily lends itself to a trilogy, for the story naturally falls into three self-contained blocks, and many of the central characters are already drawn from history with vivid strokes.  All I need is once more to tackle my ambivalent relationship as a writer with historical fiction.  Watch this space...
at 1:56 pm 4 comments:

News on The Last Free City

Readers who previously cavilled at paying £5.99 for the ebook of The Last Free City need bridle no longer.  You can now buy it on the Kindle for £0.86, $0.75 or €0.99, depending on your country of residence.  This is surely a bargain no-one can resist!
If you need any further incentive, this encomium from Chris Turner's thoughtful blog ::Fantastic Realms should clinch the deal:

In Tim Stretton’s entertaining The Last Free City we have hierarchical and intricate organization. A tightly-knit society where etiquette and tradition rule, and tradition seal the acts of most of the characters—most, except the rebel protagonist Todarko who goes up against the grain; his emotional convictions won’t let him sit back and stay complaisant, nor the disgruntled second-in-line descendant, Malvazan, who is constantly seeking recognition. Stretton is attempting to bring life to a world which defies change. Its petty politics and machinations of the ruling class clamp individuals down, heroes and villains alike. I admire Stretton for the purity of his attack. He is not relying on magical tropes or talismans to ‘jazz up’ his world, or serve as convenient means to get his characters out of jams. No, they must fend for themselves and use their own wits. This is somewhat artful and to be admired in today’s world of ever-growing adventure and pseudo-magical tales. The strength of  The Last Free City lies in its vivid depiction of reality of its participants. They are linked together in complex ways, and are intelligently-wrought humorous characters who meld perfectly with their renaissance world.