Why Should I Read...?
The King of the World
David Remnick,1998
When people under 40 think of Muhammad Ali, the image that comes to mind is probably the national--or world--treasure, bearing his illness with dignity and commanding universal respect and affection.  Those slightly older may remember his epic boxing matches with Joe Frazier and George Foreman in the 1970s.
Remnick's biography goes back still further, concentrating on his early career, particularly his first world title fight against the seemingly invincible Sonny Liston in 1963.  Sometimes I'm asked whether sports books are important enough, or serious enough, to deserve critical attention.  The King of the World is one example of why they are.
I'm not really a boxing fan--there's something highly disturbing about watching two invariably black men inflicting brain damage on each other for the entertainment of a predominantly white audience--but this is a compelling book, because it's about much more than boxing.  In the early 1960s, Ali--or Cassius Clay, as he was then--was a hugely reviled figure.  Conservatives despised him for getting above his station (with his ready wit and showman's personality, he just did not know his place), while liberals felt his association with Elijah Muhammad's Nation of Islam undermined the civil rights movement.  (Ali's commitment to black separatism caused great ill-feeling with the more integrationist Floyd Patterson, culminating in a merciless beating for Patterson in a 1965 world title fight.  Patterson consistently referred to Ali as Clay long after his conversion to Islam).
If all this were not enough to seal Ali's unpopularity, he then had the temerity to refuse to be drafted to Vietnam, a move which seems more courageous and principled now than it must have looked at the time.  "I ain't got no quarrel with them Vietkong", he memorably said.
Remnick's book, in focusing on the point at which Muhammad Ali invented himself, illuminates not only a fascinating character--more deserving of our admiration than our pity, despite the illness that overtook him as he fought on too long--but a pivotal period in US history.  The final word should go to Ali himself:

I’ll tell you how I’d like to be remembered: as a black man who won the heavyweight title and who was humorous and treated everyone right.  As a man who never looked down on those who looked up to him and who helped as many of his people as he could—financial and also in their fight for freedom, justice and equality.  As a man who wouldn’t embarrass them.  As man who tried to unite his people through the faith of Islam.  And if all that’s too much , then I guess I’d settle for being remembered only as a great boxing champion who became a preacher and a champion of his people.  And I wouldn’t even mind if folks forgot how pretty I was.

Email ThisBlogThis!Share to TwitterShare to FacebookShare to Pinterest
Labels: David Remnick, The King of the World, Why Should I Read 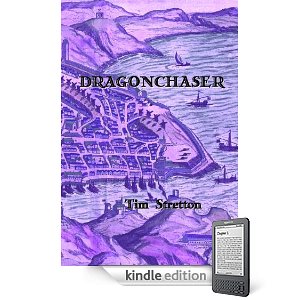 First it was self-published.  Then it came out in German.  Now Dragonchaser is available on the Kindle.  At £1.71 (the US version retails for $2.71), what do you have to lose?
This is my first foray into the ebook market and it will be interesting to see how it goes.
at 1:43 pm 3 comments:

Trapped in the Present
The decline of history teaching in our schools
There was a fascinating article by Simon Schama in the Guardian about the teaching--or lack thereof--of history in English schools.

My own anecdotal evidence suggests that right across the secondary school system our children are being short-changed of the patrimony of their story, which is to say the lineaments of the whole story, for there can be no true history that refuses to span the arc, no coherence without chronology. A pedagogy that denies that completeness to children fatally misunderstands the psychology of their receptiveness, patronises their capacity for wanting the epic of long time; the hunger for plenitude. Everything we know about their reading habits – from Harry Potter to The Amber Spyglass and Lord of the Rings suggests exactly the opposite. But they are fiction, you howl? Well, make history – so often more astounding than fiction – just as gripping; reinvent the art and science of storytelling in the classroom and you will hook your students just as tightly.

I enjoyed history at school in the early 1980s, to the extent of nearly reading it at university, but even then I came away with the sense that I didn't understand the chronology.  I left school having studied history to A level, very well informed about 19th century British and European history and not a whole lot else - a smattering of the Romans and Tudors, perhaps.  It wasn't until I left university that I decided to read myself into history, starting with the ancient Greeks and finishing with the Napoleonic wars.  Twenty years later that project is still not complete to my satisfaction (the more I learn, the more avenues for further exploration open up), but I do have a sense of the continuity of the historical record--even if not gathered at school.
These days, I understand, things are even worse.  Most children study the Tudors and the Nazis, and very little else.  One need not be a knee-jerk little Englander to find this profoundly depressing--future generations growing up with no concept of our past, which gives context to their tomorrows.
It also has interesting implications for genre writers.  Authors of historical fiction in the past might have been able to assume some background knowledge in their readers (Shakespeare probably didn't have to tell his audience who Henry V was), but today that's no longer true.  Everything has to be built from the ground up.  Yet the role of the historical novelist is more important than ever, for if schools are no longer allowed to teach history, writers become the teachers as well as the entertainers.  But children leave school without realising just how thrilling history can be, is there even a long-term market for historical fiction?
Even for fantasy writers, the subject is relevant.  My Mondia novels, in particular The Dog of the North, draw heavily on Renaissance Italy.  Yet for the reader unschooled in history, that connection is never made.  As readers become less and less acquainted with our past, there becomes increasingly little distinction between historically-flavoured fantasy and the freer-wheeling interpretations like Jack Vance's Cugel books.  Does it matter?  After all, any fantasy novel must stand on its own merits, not its inspirations?  Maybe not, but as writers we need to understand our audience--and it's an audience that, year by year, becomes less well versed in its own history, or as Schama puts it:

The generations who will either pass on the memory of our disputatious liberty or be not much bovvered about the doings of obscure ancestors, and go back to Facebook for an hour or four. Unless they can be won to history, their imagination will be held hostage in the cage of eternal Now: the flickering instant that's gone as soon as it has arrived. They will thus remain, as Cicero warned, permanent children, for ever innocent of whence they have come and correspondingly unconcerned or, worse, fatalistic about where they might end up.