Ascending the Throne
There is a theory that, the better the book, the harder it is to adapt for film or TV.  The HBO producers of Game of Thrones, which has just finished its first season, must therefore have approached their task with some trepidation; their source material,GRR Martin's Song of Ice and Fire series, is one of high watermarks of fantasy literature.  With its sprawling narrative arcs, multiple viewpoints and uncompromising bleakness, Martin's epic is not natural television.
Lovers of the books--among whom I count myself--need not have been worried.  Game of Thrones was as close to flawless as any fantasy drama brought to the screen can be.  The first season (which covered the first book in the series) was faithful to the source without being over-reverent; new scenes were added judiciously; and the series worked on its own merits while not alienating those familiar with the story.  The casting was impeccable--not just the big ticket actors like Sean Bean and Charles Dance, but also the considerable array of child actors.  Peter Dinklage, given the most promising material as the cynical dwarf Tyrion Lannister, delivered the most eye-catching of performances.
The series over, I have returned to reading the books with renewed pleasure (happy to be able cart such monstrously thick volumes around on my Kindle).  I had forgotten until I watched the series how strong an influence on The Dog of the North the series had been, with its political intrigues and moral ambiguities.  Now if anyone out there fancies making a big-budget ten-part adaption of The Dog, please do let me know...
Game of Thrones returns for a second season next year.  I can't wait!
at 7:12 am 9 comments:

Email ThisBlogThis!Share to TwitterShare to FacebookShare to Pinterest
Labels: game of thrones, george-r-r-martin, The Dog of the North, TV reviews 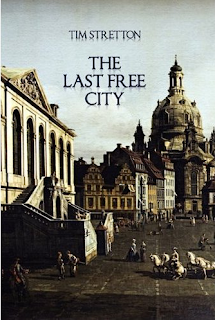 The book is only available through online retailers - £12.32 from amazon.co.uk (where Amazon tempts the wavering buyer with a 3p discount off RRP) or $19.99 from amazon.com (US readers are less fickle and need no discount to persude them to buy).
The Kindle edition is still available for those who have no more space in their house (or who balk at paying the prices quoted for a paperback) although these readers miss out on the splendid Bellotto artwork cannibalised for my cover.
at 7:25 am 4 comments: