Cover Design, Part 4
The cover for the forthcoming edition of The Last Free City was in some ways the easiest I've ever made, and in others the most difficult.  To my eyes it's certainly the best.  Here is the cover, slightly altered from the earlier version: 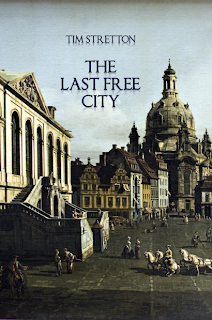 I had been fairly clear that I wanted a cityscape as the cover image, and I had a number of pictures of Dubrovnik that I'd been working from for topography and atmosphere when writing the book.  I liked this one because it had an expanse of flat colour which would have been perfect for the lettering. 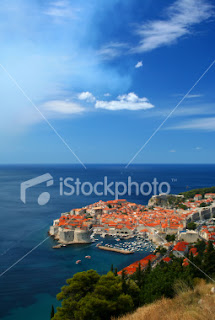 Again, though, too photorealistic and too static.  I tried superimposing another image--crossed swords--but it soon became apparent that this was the domain of trained graphic designers; the scheme was soon abandoned.
Then I had the idea of using an actual painting of a historical picture.  The constraint here was to find a copyright-free image in high enough resolution to print out clearly.  This representation of Venice from Bellini soon presented itself:

In some ways it's excellent - it captures the feel of a Renaissance city and there's plenty going on.  Too much, in fact.  It's hard to see how it would work as a cover without being impossibly cramped and busy.  But Venice put me in mind of my old friend Canaletto.  And there were several fine Canelettos out there, but the research reminded me that in many ways I preferred the work of his nephew Bellotto.  And so, after some more Googling, I came across this: not Venice at all, but Dresden, where Bellotto spent much of his career. 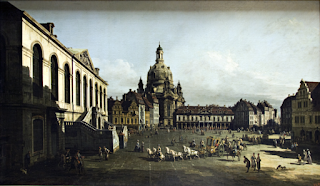 On finding this, naturally I wanted to use it immediately.  It has enough life to avoid being a static picture of buildings, a magnificent austere chill light, and the v-shaped patch of sky on the left of the picture is ideal for text.  No need to faff about with recolouring and artistic effects here - Bellotto's choices are already the optimum.  Is that cheating?  Maybe, but if so, just about all Penguin Classics are cheats too.
So there we have the cover of The Last Free City, with a little help from Bernado Bellotto...
at 11:54 am

And I can't wait to get this cover in my hands! :)

I meant to say, in my earlier comment on the MNW blog, how much I liked the cover of this one - a great design. Restrained but eye-catching. It was interesting to learn how you chose it. The other illustrations you considered were good too in their way, but you definitely went for the right one.

Thanks Len. No doubt at all that the Bellotto was the right choice.

His understanding of light and colour is remarkable (and makes him a better painter than his uncle, for my money).