Don't You Know That It's Different for Girls?
There are only two aspects of my novels which routinely attract favourable comment: world-building and my handling of female characters.  In real life, I find, I am regularly surprised by female psychology and the fact that, while they look broadly similar to us chaps, fundamental misunderstandings occur almost daily.  I don't claim this as a profound insight, but it puzzles me that I can have so little real understanding while being able to write female characters that readers respond to.
The obvious solution is that I don't in fact write female characters well, and readers are simply "blowing smoke up my ass", in the vivid transatlantic idiom.  Readers of this view should probably stop reading at this point.  The most negative review The Dog of the North received, from Helen McCarthy (a female woman, no less) in Deathray, paused to commend the "rounded, convincing, engaging" women, so I must be doing something right.
Another explanation is perhaps the generally cardboard of female characters in the fantasy genre.  There are exceptions, of course, but the source text of much subsequent fantasy fiction, The Lord of the Rings, does not draw us in on the basis of Eowyn and Arwen.  Too many women in fantasy are either enfeebled victims awaiting rescue, or implausibly rugged warrior types.  Women are plenty interesting enough in real life that the writer can adopt other models without alienating the reader.
The main reason I've been relatively successful with female characters is not, I think, because I understand the feminine psyche: it's because I don't.  My favourite female creations, Laura Glyde, Catzendralle and Larien, Isola and Eilla, are bewitching and mercurial.  The male protagonists of those novels don't understand them: Lamarck, Mirko, Beauceron and Todarko are all at home when they can move in a straight line, but confronted with subtle indirection and an absence of testosterone, they are rather less accomplished.  My own occasional bemusement at feminine behaviour is reflected in my protagonists'.
The interesting and engaging character, male or female,  for the reader, does not act predictably or within narrow boundaries.  The only living creature whose motivations and actions I feel I fully understand is my cat (and even here I may be deluding myself); and I would not argue that Britney would make a gripping fictional protagonist.  A character who surprises and baffles me will, I hope, interest the reader.
If there is an insight to be gained here, it's that to be able to write convincing characters, it's more important to be able to observe behaviour than understand it.  Creating a credible series of character interactions (often misleadingly oversimplified as "conflict" in how-to-write guides) is more about processing all the thousands of real-life interactions you've watched than understanding their motivations.  Do you understand why Iago felt impelled to destroy Othello?  Neither do I.  Do you think Shakespeare did?  Probably not.  But did it make for utterly compelling drama?  You bet.
at 9:14 am 7 comments: 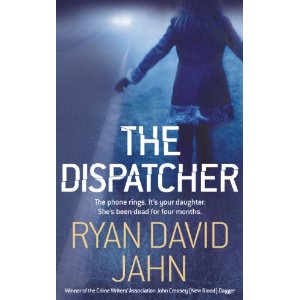 The protagonist, Ian Hunt, is a washed-up cop whose daughter Maggie was abducted and presumed murdered seven years before.  It's not too much of a spoiler to note that this turns out not to have been the case.  The plot unfolds with a grim chase across an unforgiving Texan landscape, and Hunt will stop literally at nothing in his attempts to be reunited with Maggie.  Maggie's abductor has almost no redeeming features, but there is grotesquely warped nobility in his original motivations.
The Dispatcher is a grim, bleak novel shot through with moments of pathos and echoes of normal life.  It's certainly Jahn's most commercial novel and I think it's also his best.  I look forward to the next one.
at 8:01 am 4 comments: