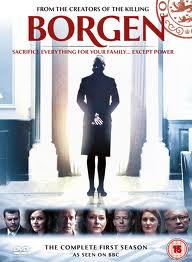 If you only watch one subtitled programme this year, make sure it's Borgen.
at 6:30 am 5 comments: