Top Science-Fiction and Fantasy Films, 2001-10
Number 1
For those of you who have borne with me so far, the revelation is at hand: the film I think better than The Lord of the Rings, Inception and Batman.  The winner, of course, (there can be no debate) is Roland Emmerich's blockbusting drama, sweeping in scope yet poignant in characterisation; a great movie in this or any decade: yes, it's 2012.
Hah hah!  Regular visitors to ::Acquired Taste will know that's bollocks.  Let's move, instead, to a film worthy of our time and attention. 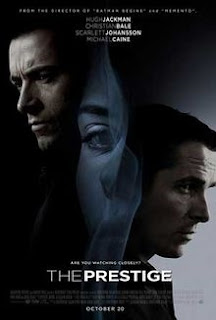 1. The Prestige, dir. Christopher Nolan, 2007
Yes, I know it's Christopher Nolan again, but you'll have to bear with me on this one.  Adapted--fairly loosely--from a fine Christopher Priest novel--The Prestige tells the story of two rival fin-de-siecle stage magicians.  You get Christian Bale, of course, as a chippy working-class lad, set against a polished Hugh Jackman; Scarlett Johannsen as their love interest; Michael Caine for once used properly; a bravura turn from David Bowie as Nikola Tesla; and a genuinely stunning climax. It has some of the same preoccupations as Inception--the nature of memory and identity, secrecy and obsession--but for me, executed in a more structurally satisying way.  Nolan artfully manipulates the audience's sympathy, so that the viewer is never quite sure to root for.  It's clever, pacy, always surprising and just about note-perfect.  Received on release with general critical appreciation if little rapture, in time The Prestige deserves to be recognised as a masterpiece.
at 12:01 am

I thought this would be your kind of gig, Aliya. I can't understand why the film doesn't enjoy classic status. But maybe it's better this way.

Few films that require the viewer to think achieve the general status of "classic." Nolan has really caught my attention with this one, and with Inception and Memento. I wonder what he'll do next!