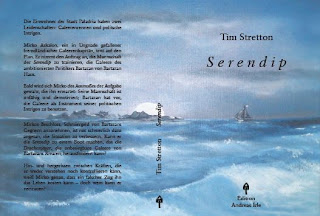 Publication of Editions Andreas Irle's Serendip, the German edition of Dragonchaser is nearly upon us.  The proprietor of Editions Andreas Irle--Andreas Irle, as coincidence would have it--has created a page on the EAI website, showcasing some excerpts and a downloadable first chapter.  Those of you of the German persuasion should proceed there immediately, without pausing to mention the World Cup.  The book is now available for pre-order from Amazon.de.
Serendip is the first book of mine to be translated, and it's a strange experience to have book with my name on it, which I can't read.  How do I know the quality of the translation if I don't speak German?  There is no cast-iron assurance: it may be my story, but they're no longer my words.  In this case, I can be confident.  Andreas is a friend of many years's standing from the Vance Integral Edition, but more importantly, he is a well-respected translator of many of Vance's works.  Since I acknowledge my debt to Vance on my own work, it's reassuring to know that my translator has a similar understanding and enthusiasm.
Even if the worst has happened, and Andreas has chosen for his own purposes to interpolate observations along the lines of "Die einzige Sache, die schlechteres als Tim Stretton' stinkt; s-Arbeit ist der Autor selbst"*, at least I won't understand it.  And such a maverick edition would rapidly become an internet phenomenon, and swell both of our bank balances.  Andreas, you didn't...did you?
*"The only thing that stinks worse than Tim Stretton's work is the author himself"
at 1:50 pm

Congratulations, Tim! I'm sure that's exciting, though I think it would simultaneously cause my trust issues to spasm violently.

I'm in the fortunate of position of having a translator I know, so it's not like having a pulp-house hack on the case.

But it still looks strange to see my work in German!

Congratulations from me, too! It looks great. now all you have to do is learn German so that you can relaly appreciate it...