You all got the ebook of Dragonchaser while it was free, right? (If you didn't, it's now £1.53 so it shouldn't break the bank).  You might be wondering now what to download and read next.  I can't recommend anything else free, I'm afraid, but you could do much worse than pick up Alan Furst's WWII espionage novels, starting with Night Soldiers. 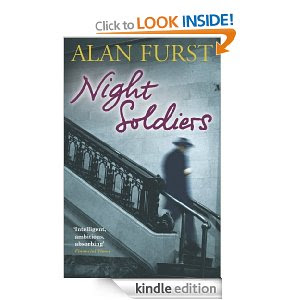 Furst is at the John le Carre end of the spectrum rather than Ian Fleming.  The novels are quiet and understated, much of the drama internal (although when the external world intrudes, it's often with shattering effect).

Furst's protagonists are pragmatists, not ideologues.  They are looking to survive in a world whose rules they did not write, and which often they don't fully understand.  The mechanics of the 1930s Soviet Union, where your friends are far more dangerous than your enemies, and "recalled to Moscow" is always a one-way trip, are especially well realised.

These novels are not for everyone.  Palates jaded by the helter-skelter pace of contemporary thrillers may find themselves asking "where's the beef?" (witnessed by some uncomprehending Amazon reviews), but once you've adjusted to Furst's calm prose and measured plotting, there's much of interest in store for the attentive reader.
at 1:10 pm