Revenge of the Killer NerdsHow baseball was revolutionised by mucking about with spreadsheetsMy interest in Americana does not extend to its sports.  Of the Big Three, football (sic), basketball and baseball, it is baseball which comes nearest to capturing my interest.  In Britain, we have a girls' game called rounders which it in many ways resembles [ducks from outraged US readers].  Last week I came across an extraordinary book on baseball, Moneyball, by Michael Lewis. 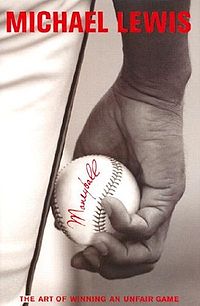 Moneyball explains the process by which the impoverished Oakland Athletics outperformed teams with much more money over an extended period.  Baseball, like cricket, is a game which generates an inordinate raft of statistics.  The A's general manager, Billy Beane, recruited Harvard-educated statisticians to work out which statistics were the best predictors of performance (these tended not to be the headline ones), and which were undervalued.At the risk of falling into crass error about a sport I don't pretend to understand, the blue riband statistic is batting average--essentially the proportion of times the batter manages to hit the ball.  Beane came to believe that a more important stat was on-base percentage--the frequency with which the batter made it to first base (which a canny player can achieve without the inconvenience of trying to hit the ball).  Batters with a high batting average were overvalued by the market, those with a high on-base percentage undervalued--so given limited resources, it made sense to invest in players who scored highly on the latter.  If this sounds dry, Lewis writes with a lively tone, and draws the characters behind the stats with engaging economy.  To enjoy the book, you probably need an interest in statistics or baseball, but not necessarily both.  Given my day-job, I did respond to the idea that sensible use of objective data was able to trump the prejudices of the gum-chewing ex-players.  It didn't do any harm either than Oakland is the home of Jack Vance, the hero of this blog.
at 7:46 am

Oh, "the girls' game called rounders"! How I hated it. That silly little bat, which never managed to make contact with the ball, and all that running from one little post to another (except I never did, because of not hitting the ball with the SLB). But I made lots of lovely daisy chains whiel I was "out".

However, I'm afraid I know nothing about baseball.

After hating maths at school, statistics and research methodology (a big chunk of my SLT course) was a revelation. It was interesting!! How could that happen? Understanding statistics is understanding the way the world really works, I came to understand, as opposed to the way it seems to work.

Frances, you might have fared better at baseball, where you get a "walk" to first base if you leave the ball alone often enough. In Moneyball, the most prized skill (because undervalued) was the ability to know when to leave the ball.

Alis, "understanding statistics is understanding the way the world really works, I came to understand, as opposed to the way it seems to work" is exactly the premise which underpins Moneyball. Once you understand the principles, statistics has considerable dry appeal.

Also, you only get to walk to first base by leaving the ball alone if the ball is thrown in the appropriate way...

I think if you ever found yourself in a situation where you were watching American football with someone who could teach you the ins and outs of the strategy it might interest you some. The game is very much about the execution of "plays," which are much little mini skirmishes in a battle.

Nevets - the game you call "football" has always seemed to me the most incomprehensible of US sports (a cynic would suggest designed wholly for punctuation by ad breaks). Your argument in its favour does make it sound more interesting.

The area where I really admire American sports is its egalitarianism - the way the weakest teams get the first pick of new players. The advent of satellite TV has destroyed the real football (i.e. soccer) by ensuring that the rich teams get richer.

I can get into amateur football (soccer), but have a hard time with professional football, because it does seem the deck is just stacked much of the time, and not because talent, skill, athleticism, or coaching.

I'll have to come up with a good way to illustrate American football sometime and tie it into writing or life for a blog post sometime.