In thirty-plus years as a reader of books for adults, including a strong interest in science-fiction and fantasy, by some quirk I've managed never to read a novel by Stephen King.  I'm not sure quite why that is.  I don't particularly care for horror, and I've always seen King as at the horror end of the spectrum.

The magic of the Kindle is that I can download sample chapters of books I'm not really sure about, and wouldn't spend actual cash on.  (There used to be an artefact known as a "library" which performed a similar function, but these seem to have fallen into disuse).  Thus buttressed, I downloaded the openings of The Stand, seemingly King's most popular novel, and The Green Mile, which I knew from the excellent Tom Hanks film. 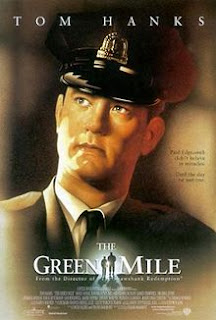 It is a possible to have a long career as a bestseller without being much cop as a writer, but there's no doubt King can write.  I devoured the opening of The Stand--a killer plague is on the loose: disaster beckons--in about an hour.  This was cracking stuff!  King does all the basics with unobtrusive excellence: inject pace, differentiate interesting characters, nail place and period.  The Stand is unputdownable, so imagine my dismay when I logged on to Amazon only to find the Kindle edition has been withdrawn!  I really don't want another 1,400 page paperback in my house, but the opening is so compelling there's no other option.  £4.99: click here for One-Click Ordering.  Job done.

To keep me going until the postman arrives, I downloaded the whole of The Green Mile, which is similarly impressive.  I know the story from the film--which appears to follow the source closely--but it's still compelling.  King has an uncanny command of voice, and critics who dismiss his work as populist pap have probably never realised how difficult it is to write something engaging and accessible.

I've got a holiday coming up and a long book in the post. What could be better?
at 1:44 pm

Two of my favorites by Stephen King. Dooma Keys is another one you'd probably enjoy, though I'd actually recommend them all :)

I was introduced to Kng by a friend who is an absolutely fanatical fan and I have to say I have been impressed too. Apparently it really galls him that he's not treated as a literary writer just because he writes books where things actually happen.
I've just tried to read Jonathan Franzen's The Corrections - an undoubtedly literary book. Give me King's lucidity and command of psychology any time.

Thanks Donna. Will add Dooma Keys to my list. I've just finished The Green Mile and found it excellent. The melancholy undertone in the book isn't picked up in the film, but definitely makes the piece stronger.

Alis, I think he makes the business of drawing character and advancing the plot look so easy (though we know it isn't) that the quality of his psychological insight is overlooked.

Readers obviously like him, and I think any writer would appreciate the quality of his craft. It's just those pesky critics who don't get him!

Aaahh, you've been sucked in! (As I was.) The Stand is great for about 800 pages but then you're really ready for it to wrap up, but there's another 600 pages left that you MUST slog through because you want to see how it all plays out.