I'm back from my excursion to cold, wet North Wales, which I described with tongue slightly in cheek as a field trip. A question that I'm sometimes asked is how, as a fantasy writer, I can do research. The implication is often that compared to, say, historical fiction, fantasy is intellectually lightweight. As one of my relatives memorably, if idiotically, put it, fantasy is easier to write than other kinds of fiction "because it's all made up". Hard to argue with that, really...

The fantasy writer's research is not in practice dissimilar to that necessary for historical fiction. The reader who willingly immerses herself in Georgette Heyer has, unless she is looking very good for her age, no more direct experience of Regency England than the reader of Jack Vance has of the Dying Earth. In both fantasy and historical fiction, the writer has to make real a world which exists primarily in his head. You might come to Patrick O'Brian with greater or lesser academic knowledge of the Napoleonic Wars, but you're entirely reliant on O'Brian to make that world real.

To be successful, fantasy fiction needs to have the same sort of historical and cultural grounding. Things may happen in your fantasy world which are not generally regarded as credible in our world, but unless you give your creation both texture and internal consistency, you're doomed to failure. For fantasy writers in the European tradition, the starting point is often European history (although other cultures can provide some fascinating departure points), very often medieval or Renaissance. That's certainly the case for the kind of fantasy fiction I write.

Given that, it's self-evident that my work is strengthened by reading around that period. (In a future blog entry I'll touch on a stimulating study of Renaissance Italy I've been reading). I don't need to be a scholar of the Middle Ages to write about Mondia, but I do feel more comfortable with a degree of immersion.

It's only one stage further on from that to visit some places that give a sense of the period and, weather notwithstanding, North Wales is pretty damned good for that. This picture of Conwy Castle--one of the best preserved castles of the period in Britain--gives a sense of what field research is like in that context: 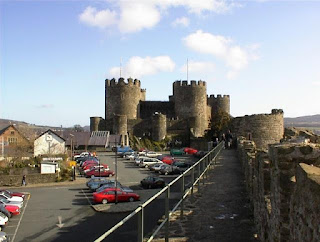 The shot deliberately includes the car park, because no matter how well-preserved the original, you still need to do some imaginative processing to strip out the 21st century. Conwy is magnificent: most of the internal walls of the castle survive, so it's easy to get a sense of the proportions of the space when it was in use; and the city walls are also largely intact. A morning in Conwy really gives a tremendous sense of what a medieval walled city and castle might have felt like (the white building to left also serves excellent, if thoroughly modern, hot chocolate).

All in all, the trip was a great success (although the drive back through a virtually snow-blocked Snowdonia didn't feel like it at the time), and it's one I hope readers of The Fall of the Fireduke will feel the benefit of in due course.

Email ThisBlogThis!Share to TwitterShare to FacebookShare to Pinterest
Labels: Jack Vance, North Wales, The Fall of the Fireduke, Writing Advice

'As one of my relatives memorably, if idiotically, put it, fantasy is easier to write than other kinds of fiction "because it's all made up".'

How that makes it easier is a puzzle to me. That's a bit like claiming it's easier to build a house than to repaint one.

The point is self-evidently moronic (and indeed derives from a person I consider a moron).

Some observations are so profoundly misconceived that the only possible response is a bark of scornful laughter.

There is somewhere a valid point about certain kinds of fiction operating with fewer external constraints than others, but the rigour operates in a different dimension. I am perhaps guilty of the same thing in asserting that, all other things being equal, a sonnet is a greater poetic achievement than free verse.

'The Fall of the Fireduke'? Have I missed something, Tim? Anyway, welcome back.

I thik that one of the reasons so many novelists--including some lit-fic types like Don DeLillo--have been attracted to the Kennedy assassination is because so much of the groundwork has been done for them by reality. They don't have to make you believe in a whole series of improbable (and seemingly inexplicable) events becasue they are part of general knowledge. All they have to do is insert a little fiction and some heretofore unknown motivations, and, as Steven Koch would put it, you're already at the top of Mount Improbability.

In fantasy and science fiction, that hike usually has to start closer to sea level.

Frances - yes, the new WiP now has a name!