On maps and worldbuilding

Once again I have been thinking about, and making, maps. Matt commented last week on the photorealistic quality of the map of 'Azundel', and clearly the style of the map influences to a large extent the way in which the observer responds to it.

I find a photorealistic map is very useful in determining 'what goes where' but it is not the kind of thing you would reproduce in a fantasy novel. I've done some work, instead, in making the same terrain into a more inviting style of map. The blues and yellows of a traditional atlas can be a good starting point, as in this version: 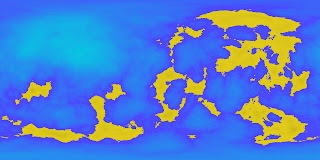 On a practical level, the colour scheme of this map lends itself to lettering, but it feels too modern to be a true fantasy map. To give a more antique feel, I often fall back on browns, and a grained paper surface, as in this version: 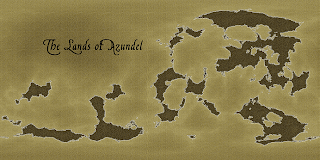 This produces a striking and decorative map, although not one which lends itself to easy lettering (imagine trying to show the names of cities against this background). Different maps, even of the same terrain, have different uses.

The next stage is to start to put cities on the map. This is where a world starts to find its feet; if you call a city "Z'Gnarth" (writer's hint: don't), it creates a different resonance in the reader's mind to "Azundel" or "Xhendelesse". At the moment I am enjoying the sound and feel of Dutch place names, so these are likely to influence the next version of the map. Who can fail savour real names like Medemblik, Zwaartsluis, Coeverden? I've always liked the look of Dutch names (who, except the Dutch, can actually pronounce them?) and the Emmenrule in my Mondia stories comes directly from the Dutch football team BV Emmen.

My next iterations of the map, therefore, are likely to place and name some cities: the point at which a map starts to become a world.