Two Gentlemen of Verona, with apologies to William Shakespeare

About this time of year in 1997--16 years ago, although that barely seems possible--I sat down in front of my very first PC.  I was determined that, having run out of excuses, I would write the novel I had been promising myself for years.  I had some vivid characters and the outline of the plot.

That Friday evening, after a day at work and a light dinner, I wrote the opening chapter of The Zael Inheritance.  (It transpired, in a process that all novelists will understand, that I'd actually written Chapter 7).

Some time later--more than six months, less than a year--the book was finished.  Of course, it then experienced rejection after rejection, and the one publisher who was seriously interested insisted on changes so pervasive that they would have killed my authorial voice.  The Zael Inheritance was no more than a few files on a hard disk and a dog-eared print-out.

In 1999, I became involved with the Vance Integral Edition, a clearly impossible amateur project to re-edit and re-publish the entire 4.4 million-word oeuvre of the great American writer Jack Vance.  (With time all things become possible: the Vance Integral Edition concluded its mission seven amazing years later).  Since The Zael Inheritance had been conceived as seven parts Jack Vance, two parts Raymond Chandler and one part Jane Austen, I was fortunate that the novel found a ready and appreciative audience among my fellow volunteers and Vance fans.

By 2005, the growth of print-on-demand technology made it possible to issue Zael in paperback.  It remains available to this day, although perhaps beyond the reach of most pockets. 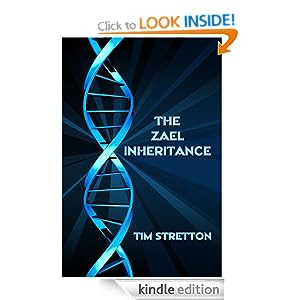 And now, in what is surely its final incarnation, The Zael Inheritance is released as an inexpensive ebook by Black Bee Media.  Some of readers rate this as their favourite of my books, and even ask (the ultimate compliment for a writer) when there will be a sequel.  I reviewed the text prior to ebook publication, for the first time in several years, and I was surprised and pleased at how well it had worn.  There's plenty I would do differently now (particularly those damn adverbs) but the book remains a coherent whole.

I remember reading Two Gentlemen of Verona as an undergraduate: the rest of the group hated it, even the editor seemed resent drawing the short straw rather than As You Like It or A Midsummer Night's Dream.  I was unique in enjoying it: I responded to the crisp clear characters and the pace of the narrative which clattered over every pot-hole without a jolt.

In my own mythology of my writing career, The Zael Inheritance is my Two Gentlemen of Verona: flawed but fun.  Why not download it and see if you agree?
at 12:30 pm