On the Big Screen...The Page Turner
I've been laid up at home with a wretched cold this week, a situation with few advantages (Sky Sports News soon loses its appeal). On the plus side, though, it's allowed me to catch up on some films I've been meaning to watch for a while. One of them, The Page Turner (2006) was so good that it almost made the cold worthwhile. 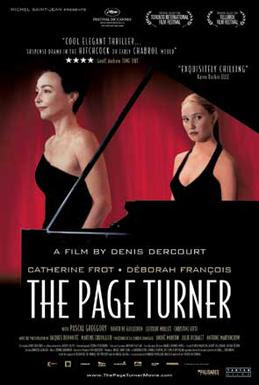 It's a French film (actual title La Tourneuse de pages) and on the surface looks like a reheat of an old staple, the Evil Nanny (see, e.g. The Hand that Rocks the Cradle). In the prologue, promising young pianist Melanie fails an important piano exam because one of the examiners, concert pianist Ariane (Catherine Frot) distracts her by signing an autograph. Melanie never plays the piano again.

In the main body of the film, however, the adult Melanie insinuates herself into Ariane's household and exacts her revenge by destroying the family. It's a very French film (it has echoes, for instance, of Chabrol's coolness of tone) and resolutely avoids any hint of moralising: it could never be remade by Hollywood without a radically different, and surely less satisfying, ending. This complete refusal to judge any of the characters by director Denis Dercourt is one of the film's great strengths.

The viewer also has to admire the way in which Dercourt constructs the film. There are no histrionics: one swoon and one moment of surprising violence aside, this is a film where all of the action takes place under the surface. It's a slow film, with plenty of space for expression; but it's never anything other than wholly absorbing.

The other magnificent feature of the film is Deborah Francois' portayal of Melanie. She hardly seems to act at all: Melanie moves in slow motion, never quite smiles, and expresses emotion only through her eyes. It's a stark, understated performance from which the viewer can never look away. She never raises her voice or her hand, but her few half-smiles are enough to show how implacable an enemy she is.

The Page Turner is a brave film. Audiences weaned on action thrillers or the synthetic emotionalism of soap operas will look in vain to see the cogs moving. Dercourt realises that drama need not mean explosions and emotion is no less powerful for being restrained.

If revenge is a dish best served cold, The Page Turner, a masterpiece of chilled understatement, is only a few degrees above absolute zero.